• March: 4-7 sessions outdoor sessions: aim is to be on the field by mid March

• Parents will choose 2 of the 4 below. Choosing a third tournament will incur an additional cost of $110/player.

• According to their birth year

• According to developmental level

• Multiple teams created in age groups based on ability

• Fluidity for players to move between teams in age group

• Work with a specific team in development group

The Development Group Director would be responsible for planning the session and helping staff coaches implement the session. There would be four coaches at each training session to ensure a 1:1 coach to team ratio.

The benefits of this format are achieving consistency of coaching throughout the club. As the Development Group Director will be creating a season plan in accordance with the club curriculum and implementing sessions based on his/her season plan, players will be taught specific themes during specific ages. This will allow players to develop their knowledge of the game and ability to execute technical aspects of the game more efficiently.

The number of Development Group Directors will correlate to the number of teams in each development group. During this first year of implementation we will plan to have a U9/U10 , U11/U12, U13/U14, U15/U16 and U19 Age Group Director for each gender.

All teams within a development group will train together. Therefore in any given session there will be appropriate numbers to run small sided games, large sided games and scrimmages at the discretion of the Development Group Director and in conjunction with the club developed curriculum. The implementation of sessions will vary from director to director but will incorporate season planning concepts such as tactical periodization and intensive attacking and defending cycles.

The purpose of running training sessions in this format centers around player development. Players respond differently to individual coaches and by allowing players to work with every coach within a development group he/she will learn the same concepts presented with different voices.

This setup also provides enhanced club unity and the opportunity for players to develop and progress from a developmentally lower team to a developmentally higher team over the course of a season or even several seasons. This fluidity will be encouraged by all coaches and will ensure that players have the opportunity to play in groups that are developmentally appropriate for them during the course of the season. Directors may determine that having a player train with a different team for a session, a week or even two weeks will aid their development. This process will look different for each development group.

Please note that these schedules are tentative and will not be finalized until December.

All players should check-in at the Pyburn Building.

Players will be evaluated based on the Key Qualities of a Billings United Player document found here. 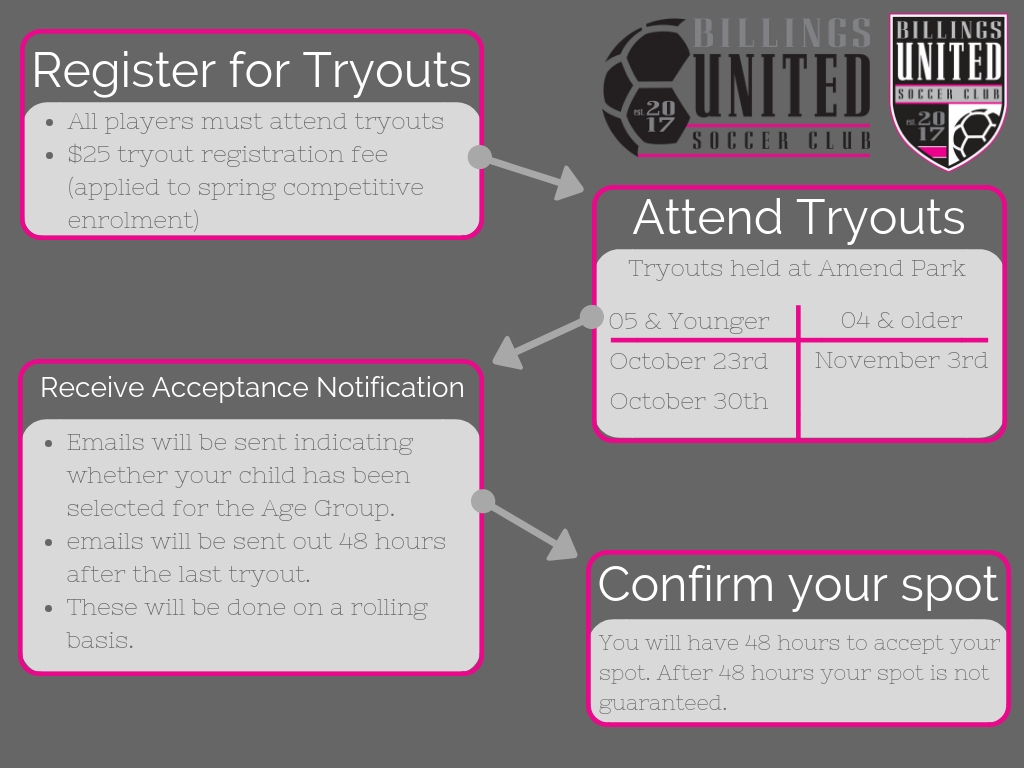